PRESS RELEASE : INTERNATIONAL CONFERENCE ON PHYSICS IN MEDICINE AND CLINICAL NEUROELECTROPHYSIOLOGY IN DHAKA 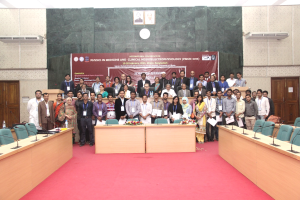 An international conference on ‘Physics in Medicine and Clinical Neuroelectrophysiology (PMCN2015)’ was held during 19-20 February, 2015 at the Nabab Nawab Ali Chowdhury Senate building of the University of Dhaka. The event was organized jointly by the Bangladesh Medical Physics Association (BMPA), Bangladesh Clinical Neuro Electrophysiologists Society (BCNEPS) and the Department of Biomedical Physics & Technology of Dhaka University (BMPT-DU). The main sponsor was Varian Medical Systems. The presence of about 230 participants made the conference a great success. Eighty contributory papers and 20 Invited talks from home and abroad, including one directly from the USA through internet, were presented in the conference. The BMPT department of Dhaka University also exhibited their research outcomes and innovative low cost products related to healthcare during the conference. That some of these innovations already crossed the borders inspired many participants in the conference, most of whom were young researchers.
National Professor M R Khan was the Chief Guest at the Inauguration ceremony while the Special Guests were, Professor S Mukarram Ali, Chairman & Managing Director of Delta Medical College & Hospital and Mr. Mir Mahaboob Ali, MD of Tradevision Ltd representing Varian Medical Systems. Three theme lectures on the topics of Radiation diagnosis and therapy, Innovative Clinical Neuroelectrophysiology as adapted to local situations, and empowering people through building indigenous capability in the design and manufacture of appropriate medical devices were presented by Professor Sadiq Malik, Chief Medical Physicist of Delta Medical College & Hospital, Professor Naila Zaman Khan, President of BCNEPS and founder of Paediatric Neurology at the Children’s Hospital, Dhaka and Professor K Siddique-e Rabbani, President of BMPA and Chairperson of BMPT-DU respectively. At the ceremony, Dr. Abdus Sattar Syed was honoured through an award for his pioneering role in establishing indigenous Medical Physics Research in Bangladesh as early as in 1978 and Dr. Syed Reza Husain for lifetime contribution in Medical Physics through establishing the importance of Medical Physicists in hospitals and for establishing the first Radiation Oncology facility in a private hospital. Professor Rabbani chaired the event.